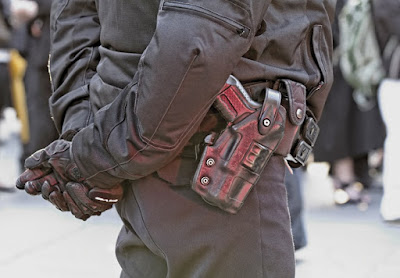 Under the proposed law, police would be required to keep their service weapon holstered until suspects were able to get off the first round, after which point the officers could then engage.

“This bill is being introduced to give suspected criminals a fair chance and eliminate confusion at potential crime scenes,” explained Congressman Chamberlain. “For far too long, our communities have had to rely solely on unreliable eyewitness accounts to contradict incontrovertible physical evidence as a means to justify rioting and looting,” Chamberlain said. “This law should clear things up.”

Black Lives Matter leaders have long complained that suspects—particularly those in poor neighborhoods—are not afforded adequate time to reach for, aim, and shoot their weapons at police officers prior to being apprehended. “It’s necessitated the whole hands-up-don’t-shoot counter-narrative,” explained one BLM organizer, who declined to identify himself.

The First Shot legislation, also know as Michael Brown’s Law, was immediately praised by George Soros, the Hungarian-born billionaire who apparently has nothing better to do than interfere with the political and legal system of the United States. According to the Washington Post, the elderly socialist who advocates federalizing the police force gave upwards of $33 million to fund and mobilize various grass-roots activist groups comprising the Black Lives Matter movement. Soros’ non-profit “Open Society Foundation” has helped underwrite riots, looting, arson, assaults, and even murders across the country, from Ferguson to Dallas. “Still, we’re still not getting enough traction on this,” Soros lamented in a recently hacked internal memo.

The First Shot law comes on the heels of the latest round of rioting in this country. On September 20 in Charlotte, North Carolina, a black police officer shot and killed an armed black man who brandished a gun and refused to comply with lawful orders to drop the weapon. These facts were announced at a subsequent press conference by Kerr Putney, the city’s black chief of police.
Regardless, protesters took to the streets for two consecutive nights of rioting, during which time a CNN reporter was assaulted on live TV, a photographer was knocked down and almost dragged into a bonfire, a white man was beaten and kicked in parking garage by a crowd of black men, and four police officers were injured even after they rescued a protester who was shot and gravely wounded. “We out like the Taliban,” proclaimed one jubilant protester in a FaceBook video.

On Wednesday, President Barak Obama urged that “local law enforcement should find ways to calmly and productively engage those protesting."

Initial reaction to the proposed law suggests that police chiefs across the country are divided on changing the rules of engagement. “I'm not concerned," said LAPD Chief Irvin Irving. “Gang-bangers are notoriously bad shots. Instead of squaring up or assuming a basic combat-stance, they like to hold their Glocks sideways because they think it looks ghetto.” But Sheriff Richard O’Shay, Cochise County, AZ, warned that, “a criminal could get lucky and actually hit a patiently waiting deputy. You never know.”